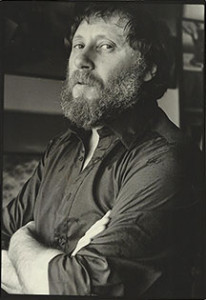 Born in 1934 and educated in Moscow, Vladimir Ryklin, upon completion of his studies, took a position with the Central Commercial Art Bureau as an illustrator and poster artist.
His employment afforded little opportunity for creative expression, and Vladimir, fearful of censorship by Soviet officials, was limited in his artistic endeavors to that which he could keep private within his own home.
Ryklin has gained wide recognition as a poster artist, not only in his homeland but at exhibitions in France, Belgium and England; his awards include Best Poster Honors in both Moscow and Bulgaria.
New York City Ballet, Dresden Opera and Vienna Opera had each commissioned Ryklin’s work, yet in his own country he was denied a privilege of being a free artist.

The repressive communist system proved too much for Ryklin, and finally, in 1975 he fled the USSR in search of the freedom he desired and the chance to pursue art as he felt necessary.
Settling in New York, he found employment with the National Broadcasting Company (NBC) as a scenic artist, a position he held for many years. Since 1990, Vladimir Ryklin has worked as a production designer for CBS Night Show with David Letterman.
But he was free to be an artist, to publicly express emotions and views through his work, no longer bound and gagged by officials.

Today he enjoys a popularity that would have been impossible to achieve had he not emigrated to US. His canvases are sought by collectors and have been exhibited in numerous well-known galleries such as “Rowe House”, “Glass”,” Nakhamkin”, “S.W.Galleries”, “Inter-Art”, as well as museums, like Munjero Museum of Modern Art in Paris, and having been shown in number of cities and countries around the world.
Vladimir Ryklin continues to work every day in his studios in New York and Florida.